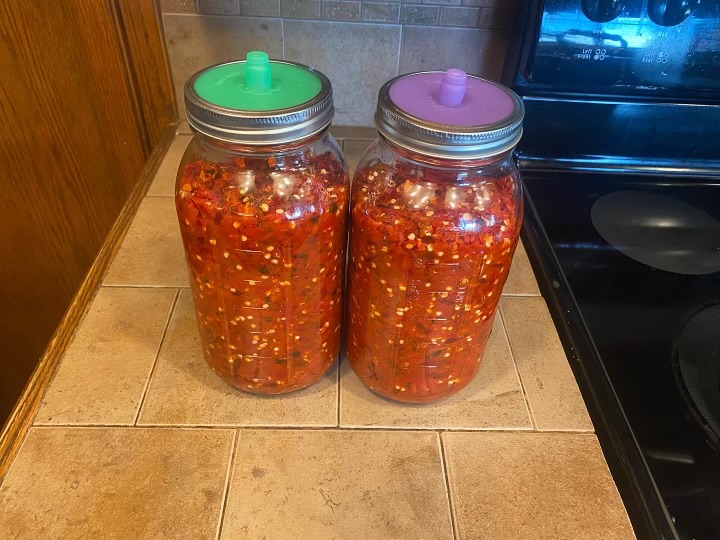 Josh has the jalapenos fermenting! In 6 weeks we should have the hot sauce in the market again for purchase. Fermenting our jalapenos allows micro-organisms and enzymes to convert carbohydrates into alcohol or acid in an anaerobic environment (an environment with no oxygen). This process provides our bodies with probiotics (which do wonders for our digestive system). It also adds a ton of tangy flavor. Hopefully, we’ll have more jalapenos to ferment very soon.

As of right now, we have tomatoes, basil, ginger, turmeric, beets, bell peppers, jalapenos, green chili peppers, cucumbers, green beans, cherry peppers, sweet potatoes, and winter squash in the ground. The problem is that we put the cucumbers in too late, we don’t have enough water for the green beans, and the bell peppers are having problems with end-blossom rot (which is a calcium deficiency). Our soil test last year said we were within range on calcium, so we think the problem is the acidity of the soil (which potentially means the plants are having problems pulling nutrients from the soil).  The Extension Center advised that we add agricultural lime, but that type of sodium could take a few years to leach out, so we decided to use compost (which is alkaline) to offset the acidity. The problem with doing that, however, is that it could take years for it to work properly. That decision was easier to say when we started, but a little harder to swallow now.

One of our longtime customers borrowed our horse trailer a few weeks ago, and we were rewarded with this WONDERFUL loaf of bread. We ate sandwiches and used it for garlic bread during spaghetti night. We only bake bread on special occasions, because it can be pretty labor intensive.  It was such a treat to get it fresh from one of our customers without having to do any of the work. When did we stop bartering like this, exchanging services instead of exchanging money? It’s so much more personable when we work for each other!

On the other side of the farm, the goats have decided that they like squash after all. I couldn’t get them to eat tomatoes or squash or beets a few months ago. Now that the pigs are eating it though, the goats have decided they like those things too. It turns out animal families are very similar to human ones. The animals, just like the kids, always have to be in each other’s business. Siblings! You can’t live with them, and you can’t live without them. 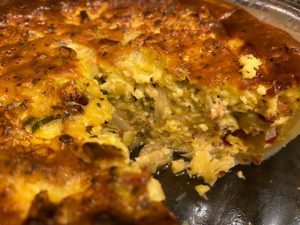 Well…I wish I could say this quiche was a hit, but the texture of the dish was just off. Who likes soggy bacon after all? Josh said maybe with lots of cheese and hot sauce, he might be able to palette it again. Overall, it was lots of work for little reward. But you can always give it a shot and prove us wrong. 🙂

I realize they’re not the sweet winter carrots we had last season, but we still have a few bags of carrots left from last week if you want to pop into the market place and make them yours.