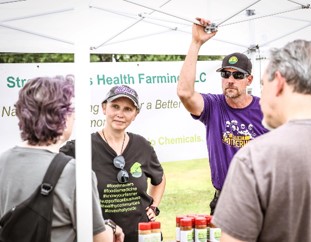 Last week we attended the first Valley Center farmer’s market on Main Street. Even though there weren’t very many vendors, I was pleasantly surprised by the turnout. Community support is so very vital for a farm like us! We didn’t go with things like tomatoes or squash because those items were reserved for our CSA members (wink, wink), but we still did decent on things like beets and garlic. The next market is on August 4th, so spread the word. We’d love to see that venue grow, so we wouldn’t have to travel as far for a farmer’s market.

After last week’s onion harvest and blister beetle infestation, we’ve been busy “reclaiming the farm,” as Josh likes to say. We’re mowing everything down and replanting everything from cucumbers to winter squash. Since we have onions and jalapenos now, it’s time to make the salsa that everyone covets this time of year. Josh has been talking about it for weeks now, so I guess it’s time to change the recipes in the kitchen from homemade pickled beets to farm-fresh salsa. We have so many people looking for tomatoes this year that I’m wondering how long we can sustain the salsa. It might be a small-batch year which is both good and bad I suppose. Either way, the tomatoes are being sold, right? 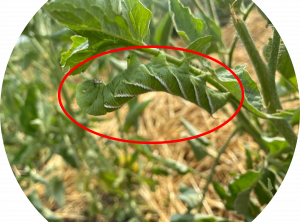 Even though the bugs and insects around here can do a lot of damage, I secretly think Josh is infatuated with them. He sends me pictures of new pests around the farm all the time, and later at the dinner table, says, “Did you see the picture of the hornworm I sent you? It was huuuge. He took down like three of our tomato plants, but I found him!” Josh also scouted an assassin bug last week which is a great insect to have in the garden since they prey on things like caterpillars and grasshoppers. But, they are not so fun to be around when you are the prey. Their bites are vicious!

Otherwise…Josh and I had a wonderful trip to Public at the Brickyard last weekend where we enjoyed some homemade Jagurwurst sausage, Cottonwood River Cheddar, and Public’s famous dill pickles that taste like a dill pickle at first, but the aftertaste is like a bread and butter pickle. You don’t have a choose anymore! You get the taste of two pickles in one. We also shared an amazing Ruben sandwich and a roasted vegetable pizza, so we might have eaten just a little too much food. It was well worth it though. We try and support the restaurants who support us. Not to mention that we really needed some time away from the farm last week. (Should I mention the blister beetles again?) 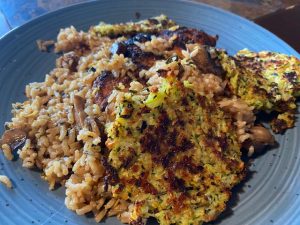 I made some comfort food this week, and there is nothing more satisfying than breaded vegetables. These fritters were perfect beside our herbed chicken and rice, but I added a few ingredients to make them more Strong Roots Healthy Farming friendly. Use your fresh Rosemary this week, and add a couple of teaspoons of it to the mixture before baking it. Secondly, if you like a little spice in your life, try a teaspoon of our spicy salt in the mixture as well.  I really have nothing more to say other than, “Yum.” All day long.

We pulled off the salad mix this week, so we could include the freshly-harvested cabbage. (If you’ve never made bierocks before, now would be the time to try them.) But if you’re really missing the salad mix, we still have it. You can order it from the market place prior to tomorrow’s pickup.