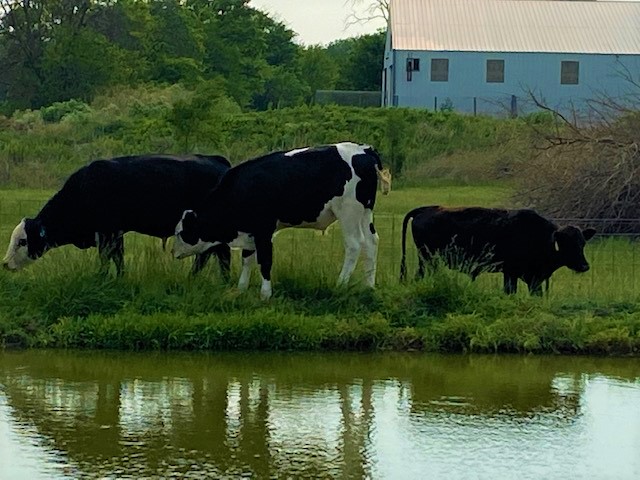 Ah, the inevitable! We now have steers. Josh was worried about having to mow the property, and I was worried that we wouldn’t be able to afford meat in the coming year, so we solved both problems. Josh wanted to name the cows Rump Roast, Brisket, and Hamburger. But the boys weren’t having it, so now we have Mondy, Jupiter, and Cury. My middle son said something about space names. Mond is the german name for moon, hence Mondy. Cury comes from the planet MerCURY. And Jupiter is self-explanatory. Kids can have such creativity if you let them.

Look at what we’ve been waking up to every morning. Aren’t those beautiful purple flowers? I think they are one of my favorite flowers. Interestingly enough, those are sage flowers. Not only are they beautiful, but they’re also rather tasty as well. Since sage is a perennial, the flowers don’t hinder production. Once the flowers die, we’ll have big beautiful sage leaves. In contrast, we’ll need to cut the flowers off the basil if we expect to get any flavorful leaves. Basil is not a perennial here in Kansas, so we’ll need to cut the flowers off to ensure the plants put production into the leaves before we need to pull out the plants.

Sage and basil are not the only herbs taking root. Take a look at the ginger we have sprouting! Aren’t those the coolest-looking stalks you’ve ever seen? They remind of me the stalks from the magic beans in Jack in the Beanstalk. I still haven’t seen a turmeric sprout yet though. I’m starting to get worried about that. I just don’t think we kept it moist enough when we originally tried to germinate them (just my theory). Otherwise, the greenhouse is starting to smell like a tomato wonderland. I love to water the tomato plants and smell that acidic odor they give off.

The cows aren’t the only new creatures on the farm. We have prairie tarantulas (scary but also kinda cool), frogs, garden snakes, and turtles too! One of the cats brought this little guy to us, so Josh had to go put him back. As you can see, he’s pretty small but no less magical. When we bought this farm, one of my goals was to create a diverse environment created by both plants and animals. The fact that we have so many plants and creatures wandering the farm is absolutely fantastic. In my old age, I’ve learned that some of the most fascinating things are often also the most simple. 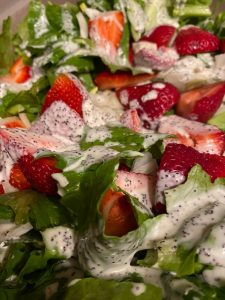 So many salads these days require Romaine lettuce because it stays crisper than a standard lettuce mix. This is just one example, but it was delicious. Add some protein with grilled chicken or chicken-fried steak, and call it a meal! I wish I could stay the strawberries were ours, but give us a few years. They will be!

We’ve added nasturtium leaves to our spicy microgreen mix. Nasturtiums are actually a flower, but the whole plant is packed with Vitamin C. They have a sweet taste at first and then…Pow! The radish-type spice really hits you hard. The leaves remind me of little lily pads. Every time I see them I think of Claude Monet’s water lily painting. But whatever the case, they really add an extra zing to the spicy mico mix in case you’re interested. They’re available on the market place this week.