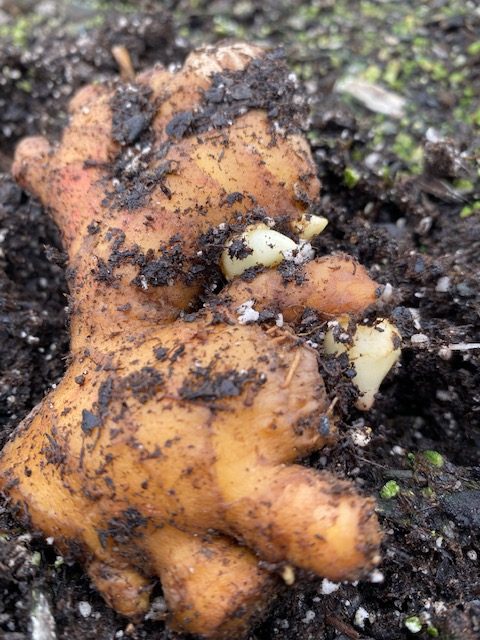 We’re planting ginger and turmeric in the greenhouse this week. These ginger roots have been occupying our seeding room in flats for a few months now. We’ve been waiting, so we could dig them up and find these wonderful little “eyes” on them (kinda like potatoes). These eyes or sprouts are planted facing up. Now, we just have to wait until October before we reap the benefits. That feels like a long way away, doesn’t it? Patience is a virtue I suppose…

The grapes showed up at our doorstep this week, and Josh wasted no time putting the vines in the ground. You know, I’m the one who started this thing about adding fruit to our business. Josh was not “gung-ho” about it, and it took quite the convincing efforts on my part. But now that we have all these wonderful trees, vines, and bushes showing up to plant, I must say that Josh has become quite the advocate. He’s ALMOST as excited as I am!

How about that Blossom Festival yesterday at Elderslie Farm? I hope at least some of you got the chance to go out and enjoy the festivities. We try to support local businesses as much as we can, so we attended with microgreens and eggs in tow…even though the wind was, shall we say, uncooperative. 🙂 Regardless, the food was good and the people were amazing. I cannot wait until blackberry season hits us and we get to pick those wonderfully, juicy treats and feast on their nectar.

Since this has been the year of wind, I’ve gotten increasingly concerned about our poor chickens. The chickshaw is great, but we’re in need of something that protects the laying boxes from the wind. Every time we go out to let them out or collect the eggs, the laying boxes are pushed in or scrambled up (excuse the pun!). So I challenged our boys to make a flap on the chickshaw that we could open and close based on the weather. They haven’t quite gotten it completed, so we improvised with a large hay bale. As soon as the boys have it finished, I’ll post it on social media. I insisted on keeping their father out of the building of it because I wanted them to accomplish something all on their own. And Josh, the poor man, is getting pulled in way too many directions! 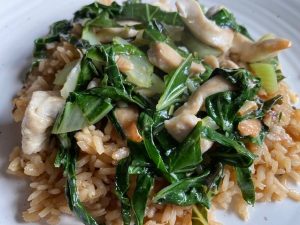 This is a VERY simple little recipe that everyone in the household enjoyed. I won’t say they were whooping and hollering, by any means, but it served it’s purpose, and no one complained (which is always a plus). But more importantly, WebMD says that Bok Choy can reduce the risk of cancer, fight inflammation, and lower your risk for heart disease. “It’s full of cancer-fighting compounds such as vitamins C and E, beta-carotene, folate, and selenium. Vitamin C, vitamin E, and beta-carotene are powerful antioxidants that can help to prevent cell damage from free radicals, which may help to lower your cancer risk.” 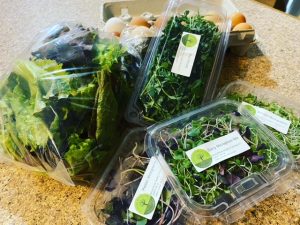 The Market Place has microgreens to supplement those meals that may not quite be as healthy as you might like. A few microgreens can add quite the nutrition to a meal. In fact, Healthline says that microgreens can contain up to nine times higher nutrient levels than mature greens can! And let us not forget in celebration of Earth Day last week, we bought our first compostable clamshells. This is our first step towards plastic-free packaging. (I’m dancing a little as I type this up cause this is another HUGE win for me!)