In 2022, we’re moving to posting blogs rather than sending out newsletters. This way you can get the content you want easily and more efficiently: products for the week, recipes, and farm news.  If you want to access our old newsletters, you can still see them on our Newsletter Archive Page.

One of the things the Strong Roots Healthy Farming Family is trying to adopt this year is to keep our eyes, ears, and mind open to new opportunities. Sometimes I think we close ourselves off to new things simply because it doesn’t fall in line with our plans. Plans are cool. Don’t get me wrong – everyone needs goals, but oftentimes, bright and wonderful things get bypassed because we’re so focused on that plan. This little resolution leads me to our two new animals on the farm – our pigs: Naki & Peg. (There’s a rather long story from my children about the naming convention. Don’t get me started.) When an opportunity presented itself, we took it. Even though we’re raising them for meat in the coming year, I must say, they sure are cute.

END_OF_DOCUMENT_TOKEN_TO_BE_REPLACED 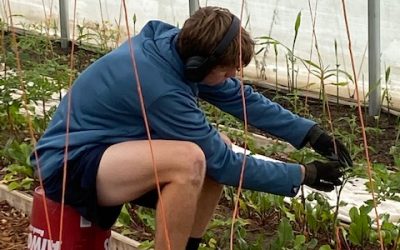 Good News! We’ve hired a helper this Summer. Our son has taken us up on our offer to work for us 20 hours a week. So far, he’s fixed a few wheelbarrow flats, cleaned the seeding room, trellised tomatoes, built a fence for the cows/goats, and worked on cleaning out the pigpen. Wait! Did I say pig pen? Yikes! We had another opportunity arrive at our doorstep, so we took it. Now we’re expecting pigs. I keep telling myself that we’re just taking on too much, and we probably are, but…one of the things we really wanted with this farm was diversity. And diversity we shall have.

END_OF_DOCUMENT_TOKEN_TO_BE_REPLACED 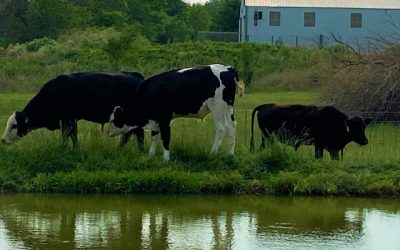 Ah, the inevitable! We now have steers. Josh was worried about having to mow the property, and I was worried that we wouldn’t be able to afford meat in the coming year, so we solved both problems. Josh wanted to name the cows Rump Roast, Brisket, and Hamburger. But the boys weren’t having it, so now we have Mondy, Jupiter, and Cury. My middle son said something about space names. Mond is the german name for moon, hence Mondy. Cury comes from the planet MerCURY. And Jupiter is self-explanatory. Kids can have such creativity if you let them.

END_OF_DOCUMENT_TOKEN_TO_BE_REPLACED 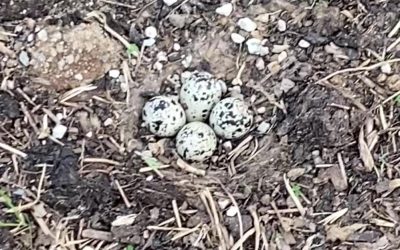 Josh had a little surprise when he started prepping field 2 this week. He couldn’t figure out why this bird, called a Deer Kill, kept following him around on the tractor until he looked down and saw this nest in the ground. Josh said that the bird kept acting funny like it was hurt to try and distract him from the nest. Long story short, little Deer Kill really put on a show. Josh tried to get it on video, but he’s having some issues with the latest iPhone update. The reel he thought he recorded didn’t quite make the cut. Regardless, we had to do an emergency move of the eggs, so we’re hoping momma doesn’t have any issues with that.

END_OF_DOCUMENT_TOKEN_TO_BE_REPLACED 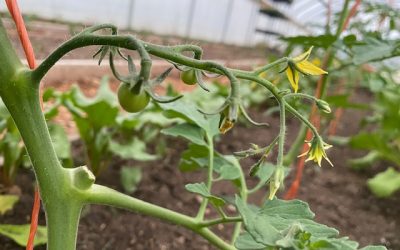 Fruit on the tomato plants is a sure sign that summer is coming soon! We’ve been slowly but surely terminating rows of greens so that the tomatoes and beets can be transplanted. We have everything from big slicer tomatoes to cherry tomatoes to paste tomatoes.

END_OF_DOCUMENT_TOKEN_TO_BE_REPLACED 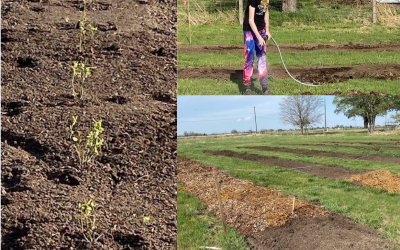 This week was blueberry week. We had to add organic, elemental sulfur; organic bonemeal; aged manure; and organic poultry fertilizer to the soil in preparation for planting. Then we planted, watered, and we are now in the process of mulching. Next will be the drip irrigation system.  Blueberries are going to be quite the project for us!

END_OF_DOCUMENT_TOKEN_TO_BE_REPLACED 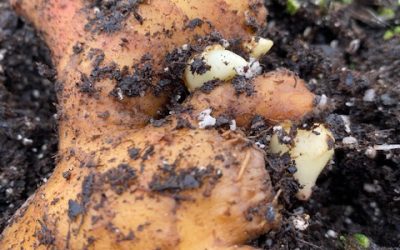 We’re planting ginger and turmeric in the greenhouse this week. These ginger roots have been occupying our seeding room in flats for a few months now. We’ve been waiting, so that we could dig them up and find these wonderful little “eyes” on them (kinda like potatoes). These eyes or sprouts are planted facing up. Now, we just have to wait until October before we reap the benefits. That feels like a long way away, doesn’t it? Patience is a virtue I suppose…

END_OF_DOCUMENT_TOKEN_TO_BE_REPLACED 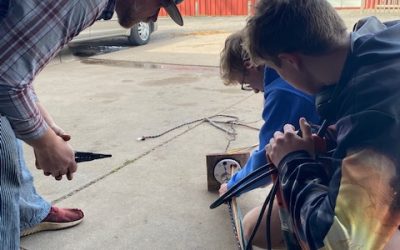 When Josh added the sprinkler systems to the first field, he noticed that the water pressure just wasn’t making the grade, so he spent the majority of the week researching a well pump upgrade which he installed on Friday. We went from a one-horse, 10-gallons a minute pump to a one-and-a-half-horse, 27-gallons per minute pump.

END_OF_DOCUMENT_TOKEN_TO_BE_REPLACED 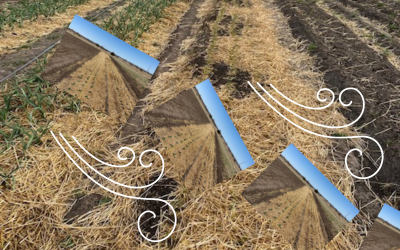 If you took the tour, most of you saw our first attempt at straw mulch last week. Guess what? That mulch was all blown away by the wind. (Heavy Sigh) Note to self: Ensure sprinkler system is in place prior to putting down straw mulch.

Get In Touch or Visit The Farm Anytime

We always welcome feedback, new recipe ideas, and questions about how we grow our food.